Right in the main avenue Portal Hidalgo with the number 229 is located the Casino Hotel.

Was here where the third Bishop Don Juan Medina y Rincón had the Royal Hospital moved in 1580, which served as such until 1660.

By 1735 this property was remodeled into a beautiful residence, and shows how was the lifestyle of the Morelian society on those days. The product of farms, mines, mills or shops.

As used in colonial times, merchants lived upstairs and their businesses downstairs, along the portals.

Important figures in national and local life passed through the portals, in the famous cafes, there conspired and those who dreamed and promoted the independence of this nascent nation lived together.

On August 1st, 1887, the Michoacan Casino was inaugurated, where the most notable families of Morelian society met, a place promoted by the young people who formed the Mariano Jiménez Philharmonic Society and which had a total of 140 members.

In early years of the 20th century, in the elegant hall of the "Hotel Casino Michoacano", the billiards business worked. 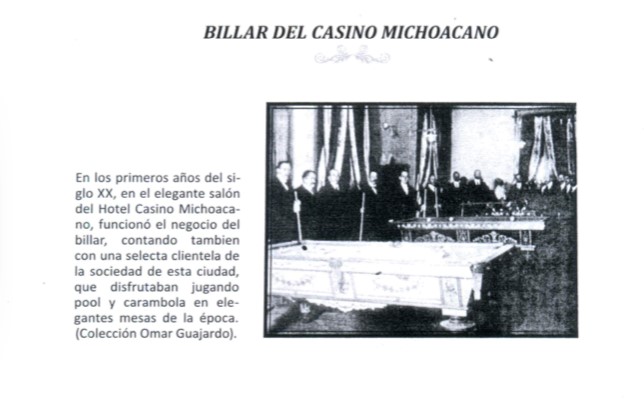 Well into the 1960s, society events were held at the Michoacan casino hotel, including the traditional Black and White dance. In addition to having a very representative canteen of Morelia.

In 1967, this mansion with a Viceregal character from Morelia opens its doors to a new stage, "HOTEL CASINO MORELIA", with its emblematic history, tradition and its coffee in the portals, creating a relaxed atmosphere between locals and foreigners.

It is an authentic local farm with its patio trees, plants and ferns, with the sound of falling water in the fountain, Michoacan handicrafts guarding its walls, and paintings by Michoacan authors adorning some of the corners, which make you feel welcome. In a space where the pride of being and showing Michoacan is lived at every step.

The doors open your stay to a World Heritage city to live it to the fullest.